The 10 MOST VALUABLE and AWESOME DOMINARIA REMASTERED Cards You MUST Have! Now when it comes to values, these new Dominaria Remastered versions definitely are pricey. However, prices will not be as expensive as previous versions and it’s a great opportunity to add some iconic Magic cards to your decks or collections for a reasonable number.

For our purposes, each card below will have multiple versions and we’re going to list the highest value non-foil version first. But again you’ll be able to find Borderless, Retro Frame, Regular and Foil versions of all of these cards and their values will vary. If anything, this list will at least give you the Top-10 cards you should be looking for in ANY version.

So, that being said, let’s get into it! Coming in at number 10 on our list is the Mystical Tutor. This is a great rare card for a blue deck that needs an instant or a sorcery card quickly. Although the ability doesn’t put the card right in your hand you certainly have it available for your next draw. And for only one blue mana it’s certainly an easy way to get a card you need quickly. No Mercy is one of my favorite cards for black decks. If your opponent wants to send creatures across to attack you they better be ready to sacrifice them because ‘No Mercy’ will destroy them. It’s a great card. And it’s an Enchantment to boot so unless your opponent can destroy Enchantments, this puppy will sit out there and keep wreaking havoc.

This reprint originated in the Urza’s Legacy set back in 1999 and the borderless rare version goes for about $15. There’s also a Retro Frame and regular version of this card that goes for about $5 less. So why would you want a card that allows you to search your library for another card and put that into the graveyard? One great combination that comes to mind is this card Entomb paired with Reanimate.

First you cast Entomb, search your library for a creature card and then put it into your graveyard.  Next you would cast Reanimate, search your graveyard for that creature and put it directly onto the battlefield. This could save you quite a bit of mana, although you do lose some life from casting Reanimate.  It’s a deadly combination!

Originally printed in 2001 in the Odyssey set, Entomb has been re-printed a few times. More recently in Ultimate Masters and Eternal Masters among others.

The Dominaria Remastered Borderless Rare version tends to be the most expensive at around $10. But on a good day you can also find the Retro Frame version (or regular version) of this card for about the same price or a bit cheaper. Enlightened Tutor is the white version of the Mystical Tutor. It’s a great one white mana Instant that allows you to search your library for an Artifact or an Enchantment, reveal it and then put it on top of your deck. There it will sit for your next draw ready to be played.

The card was originally released in the Mirage set back in 1996 and then a few years later in the 1999 6th Edition set. The good news is you’ll pay about half as much for this Dominaria Remastered version which is coming in at around $17-$20 for the Borderless Rare version.

Definitely one of the 10 most valuable Dominaria Remastered cards you can find. First introduced back in 1999, Urza’s Incubator was one of the big hitters in Urza’s Destiny. That original card is bringing an easy $40-50 these days so it’s nice to see Magic bringing back this iconic card in Dominaria Remastered.

It’s simply a great Artifact to include in just about any creature-centric deck. For a measly three colorless mana you have an artifact that sits there and allows you to choose a creature type and pay two less mana to cast those creature types. There are so many combinations that could make this card a great asset in just about any deck you could think of.

The Dominaria Remastered Borderless Mythic version is currently going for north of $20 and I suspect it will be pretty stable at that price level for the forseeable future. You’ll also find the regular version of the card and a Retro Frame version which could save you a few dollars if you can find them.

This will definitely be a highly sought after card in Dominaria Remastered! 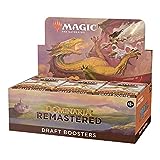 Now we’re getting into the heavy hitters when it comes to the 10 most valuable cards in Dominaria Remastered. One of the most iconic cards in the set and part of this valuable list is no doubt the ‘Sylvan Library.’

If you’re old school and have been around a while you know that the Sylvan Library is an extremely popular card and an iconic one from the popular and very expensive LEGENDS set from back in 1994. You would be hard pressed to find anyone who doesn’t recognize the name ‘Sylvan Library.’

Much has been written about this crazy Enchantment over the years. It has some insane combinations that allow you to draw tons of cards and, if played with the right cards, avoid paying the 4-life cost to keep the drawn cards in your hand. I won’t go into the craziness of how to play this card as that’s not our focus. But values are.

When it comes to value, the good news is you won’t have to shell out the $150-200 for an original Legends Sylvan Library. The Dominaria Remastered Borderless Mythic version will currently run you closer to $30-$35 so it’s by far a welcome card in this new set. I would expect the Retro Frame version to possibly save you a few bucks and the regular card to get you closer to the $25 range too.

I wouldn’t call this a great investment by no means, but it does have the potential to be a long term keeper that could gain value down the road. Regardless, it’s a great playable card and a decent investment of your money as a player if you can find one cheap enough (or open one in a pack!) This is another card I’m excited about mainly because we finally get to see a new artwork version of this original 2019 Modern Horizons card!

Yawgmoth, Thran Physician was super popular back in 2019 and then again in 2021 with the release of Time Spiral Remastered. There’s only so many places to find this legendary creature and now you have some more chances in Dominaria Remastered.

This one is getting quite pricey already but it will save you a few bucks off the $35-40 Modern Horizons and Time Spiral Remastered versions. Right now you’re looking at about $25-30 for the Dominaria Remastered Borderless Mythic and around that same number for the regular and Retro Frame versions.

Because there are only so many options to find this card and it hasn’t been reprinted in too many sets, I expect this card will remain pricey for some time. Powerful cards that are also in low supply usually equals big bucks. The Vampiric Tutor is back! First it was Visions, then 6th Edition, then Eternal Masters, then Commander Legends and now it’s back again in Dominaria Remastered. It’s the card that keeps on coming back and back!

But how can you fault WotC for bringing back this iconic card. And the best thing is that we get another artwork version with the Borderless Mythic too!

So how much will this run you? Probably $25-30 right from the start and I suspect it will settle into that range for quite some time. The supply is not too scarce and although demand is high for the card it’s not too high to push the pricing up above $30-35 anytime soon.

But hey, it’s a great card and one that will certainly have collectors and players clamoring to open packs. Just what Wizards of the Coast wants!

Now we’re getting down to the big ones. Coming up in the number two slot on the list is Urza, Lord High Artificer, a Modern Horizons reprint that has been in high demand but has also been costly because of that for the last few years.

But collectors and players will be rejoicing soon as they’ll have the opportunity to get this legendary creature for much less than the $60-80 price tag of the Modern Horizons version. How much less will be the big question.

Right now you can find the Dominaria Remastered Borderless Mythic for almost half that price in the $35 range. It’s the one I would recommend because the new borderless artwork is simply amazing and way better than the artwork on every other version of the card.

If you want to save a few more bucks, hunt down the Retro Frame or regular versions as you’ll probably get those for under $30 right now. I expect prices to creep up over time and it wouldn’t surprise me to see values start to get up into the $40 range a few months from now.

I have a sneaky suspicion that Wizards held back on the print run a bit for Dominaria Remastered. And if rumors start circulating that the distributors are sold out and not getting any more stock, you’ll see Dominaria Remastered booster boxes go up in value and that will drag the price of singles up too. Including Urza, Lord High Artificer! 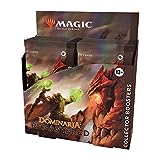 FORCE OF WILL (Retro Frame Mythic) What’s a set without the king of all Alliances cards, Force of Will? It’s nothing I tell you, NOTHING!

And here’s the deal, if you’re going to bring back Force of Will, why not up the ante a bit and come up with some amazing artwork to really blow people away. I think artist Richard Kane Ferguson totally killed it on the Borderless version and Donato Giancola took the original Alliances art and made his own fantastic version. Both are amazing and I’m hoping to get lucky and find both in packs in the coming days. As you would expect, values are going to be WAY up there on the Dominaria Remastered Force of Will. I really thought the Borderless version would be bringing higher prices like the rest of the cards in this Top-10 list but that’s not the case.

The Retro Frame Force of Will appears to be the clear winner for now going for around $100-110. The Borderless and regular versions are still up there in the $75-90 price range but the Retro Frame is the one to get.

There’s no saying what the Dominaria Remastered Force of Will versions will do over time, but as I mentioned earlier the values could go up if we see any news about supply issues. If the print runs are low (which I expect they’ll be), you could see values rise and stabilize close to that $100+ range for any version of this card.

It’s certainly the card you want to find in packs so good luck hunting for this one!

There you have it! If you have any questions about the Dominaria Remastered Top-10 list, please send me a message and I’ll get back to you and maybe even post an update right here. Take care and I’ll see you back here soon! Find out which booster boxes are coming out for MTG DOMINARIA REMASTERED and which cards will be HIGHLY sought after!