If you’re anything like me then you’re probably totally obsessed with Magic: The Gathering (or know someone who is) and you’re here looking for gift ideas. Well you’ve come to the right place!

Magic: The Gathering (MTG) is a game played by people of all ages and the great thing is that ANY one of the gift ideas below would be great for a teenager or great for someone like me in their 50’s!

Whether you’re looking to spend less than $50 or your budget well more than that, there is a great idea below for any MTG fan. And as someone who loves the game and has played and collected Magic: The Gathering cards since 1994, any one of these items would make someone happy on Christmas day.

So here are my personally picked BEST MTG CHRISTMAS GIFT ideas for 2022….in no particular order of course! 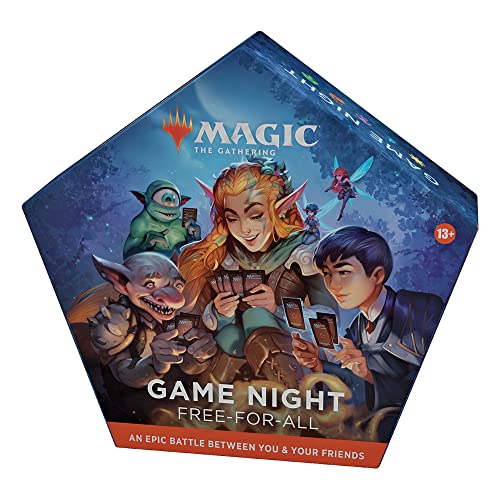 The Magic: The Gathering GAME NIGHT: Free-for-All 2022 is one of my personal favorites as it’s inexpensive and GREAT for the beginner or seasoned Magic veteran. I personally own this item and the reason I purchased it is because I purchased last years’ version and it was a HUGE hit in my home.

I love the idea of just pulling out some pre-made Magic: The Gathering decks and not having to think about trying to make a custom deck.  This box contains FIVE 60-card decks (each with a brand new foil card) along with life counters, tokens, a rulebook and really EVERYTHING you need to play a game of Magic: The Gathering.

My son and I love this Game Night box of sets.  We’ve had so many game nights and have had a ton of fun playing each other to see who can beat who. Sometimes we’ll close our eyes and randomly grab a deck and what you get is what you play with. It’s super fun and all the decks are easy to learn and a ton of fun. It’s the perfect gift for the person who has never played Magic or the long time player like myself. 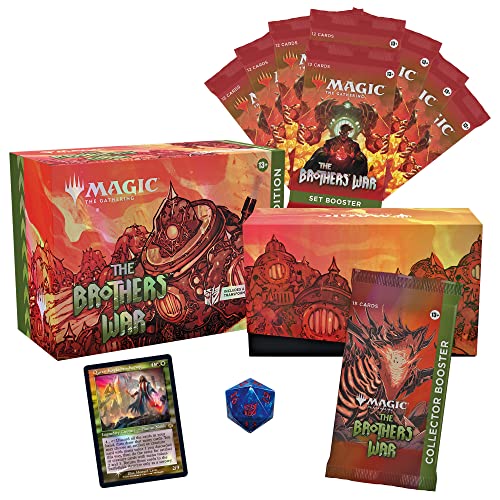 Magic: The Gathering The Brothers’ War is the newest set that is being released right before Christmas 2022. So if you know someone who wants Magic cards for Christmas, “The Brothers’ War” is the very latest and greatest set put out by Wizards of the Coast (Hasbro.)

The Magic: The Gathering The Brothers’ War Gift Bundle is the perfect gift to introduce someone to this new set without breaking the bank.  I love these Gift Bundles for Christmas as the box contains EIGHT packs of cards, ONE Collector Booster Pack (which has all sorts of Foil cards, rares and mythics) and FORTY land cards to help you build decks. They also throw in a life counter, a cool box to hold the cards and TWO special foil cards!

I always get my son the GIFT BUNDLE as you get a lot for your money. The Collector Booster Pack alone is a $20-25 pack….and maybe worth more if you get something super rare! Just a great gift for the Magic fan. 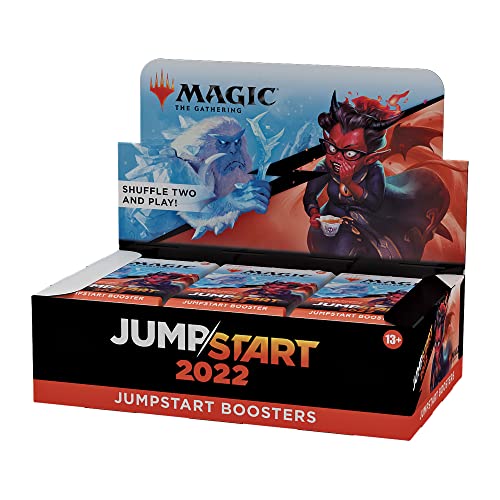 The idea is you take two booster packs, shuffle the cards together and you have a deck ready to be played. It’s just what the product says…..it’s a jumpstart into the game to allow players to put together decks quickly. The possibilities are endless on the types of decks you’ll come up with by randomly shuffling two packs together!

The previous Jumpstart product released back in July of 2020 was extremely successful and I expect Jumpstart 2022 to be just as popular among players and collectors. It’s set to be released the first week of December so just in time for Christmas! 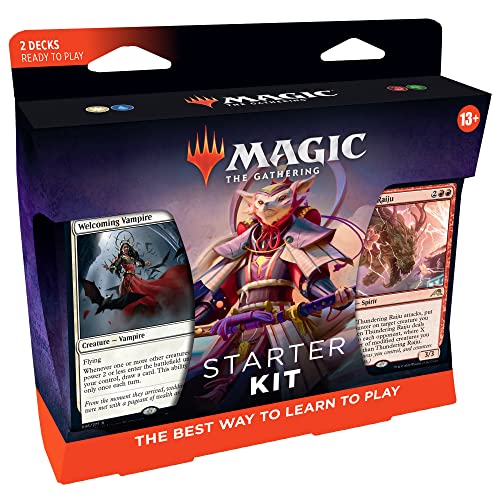 The Magic: The Gathering 2022 Starter Kit, which includes 2 Ready-to-Play Decks, is another great gift idea For both the beginner and the seasoned veteran magic the gathering player. I love your gifts that you can use right away and this is one of them. Plus it’s a great stocking stuffer if you’ve got a big stocking to stuff!

In this package you’ll receive two preconstructed decks that anyone can play right out of the box! Each box contains (2) ready-to-play 60-card decks—1 White-Blue combo, 1 Red-Green combo. It’s perfect for the newbie who wants to learn how to play and learn the intricacies of Magic. Not to mention the price is right as you’ll get two sets for under $15. Even better! 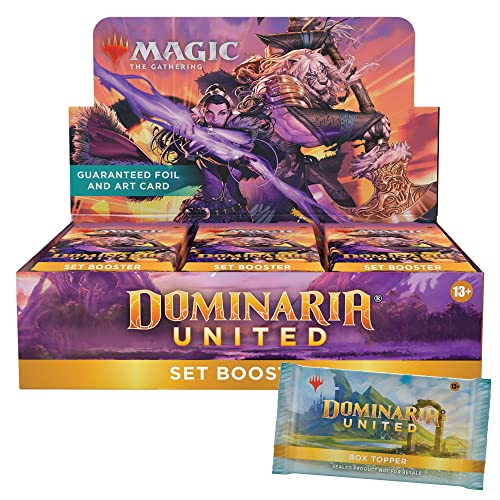 Magic: The Gathering Dominaria United I was just released a few months back and it’s an extremely popular set among players and collectors. If you have someone that is looking for magic cards for Christmas and wanted packs or a booster box, this is a great one to get.

The Magic SET booster boxes are normally way better than the Draft boxes because you get better cards out of the packs. Collectors and players love the SET booster boxes because of the value inside the box as well. So, if you have someone that loves Magic The Gathering and is looking to open packs on Christmas, this Magic DOMINARIA UNITED SET Booster Box is easily one of the better ones that came out in the past year. Highly recommended!

If you really want to impress someone with the ultimate Magic: The Gathering gift I would recommend going for one or both of the BEST two New Booster Boxes out there of “The Brothers’ War” set. 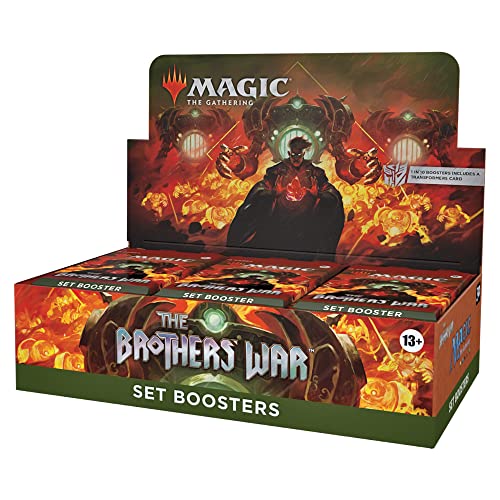 On the lower end of the price scale, I would recommend The Brothers’ War Set Booster Box which contains 30 packs with each pack containing 12-cards and 1 Retro-Frame Artifact card.  As mentioned above, the Set Booster boxes are the best when it comes to pulling the most rares, mythic and foil cards and the box is definitely worth the price. 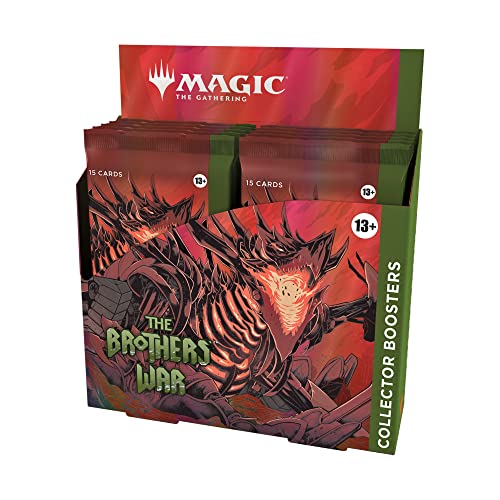 For the higher end collector and player, The Brothers’ War Collector Booster Box is the ultimate gift. Although you only get 12 packs in every box, it is by far the most fun to open because literally every card in the pack is foil, rare, mythic or unique to this box. 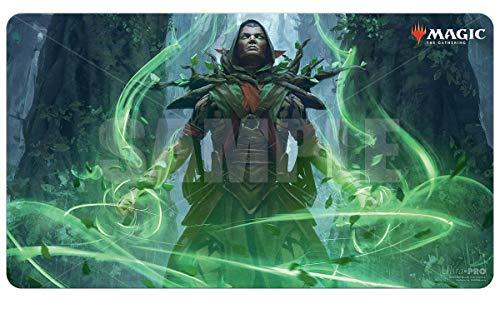 I love Ultra Pro Playmats, especially the ones that are geared towards Magic: The Gathering. I grew up playing Magic on the kitchen table, but when they started making these really cool playmats, I was hooked.

These playmats would make a great stocking stuff type gift for any player and you really can’t go wrong with any design out there by Ultra PRO.  The link above will bring you to Amazon’s Ultra PRO page specifically for playmats where you’ll find some great designs. It’s hard to choose the wrong one as they’re all really cool.

Definitely a great pick for Christmas! 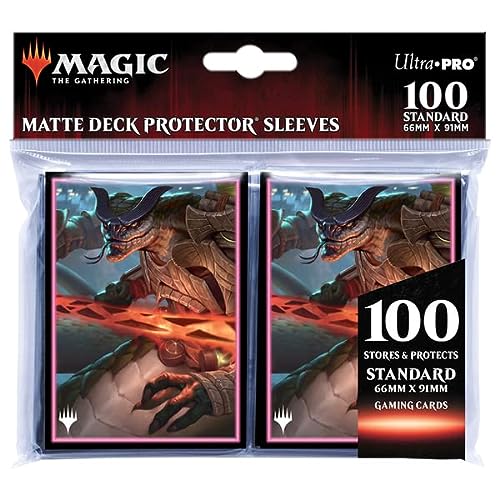 Most players are also collectors and if they’re like me, they like to keep their cards in as nice a condition as possible. It’s hard to keep your special foil rare and mythic Magic cards in nice shape when you’re constantly shuffling them and playing games which is why Card Sleeves are a must have.

Like playmats, Ultra PRO card sleeves come in hundreds of designs and they’re all meant to protect your Magic cards when storing or playing the game. Most times you’ll have either a 60-card regular deck or 100-card Commander deck when playing Magic so what’s great is each pack of card sleeves gives you a total of 100-sleeves. It’s the perfect amount for any deck.

The price is great on these card sleeves too so grabbing a few designs for stocking stuffers is always a great idea. It’s another can’t-go-wrong gift for the Magic player! 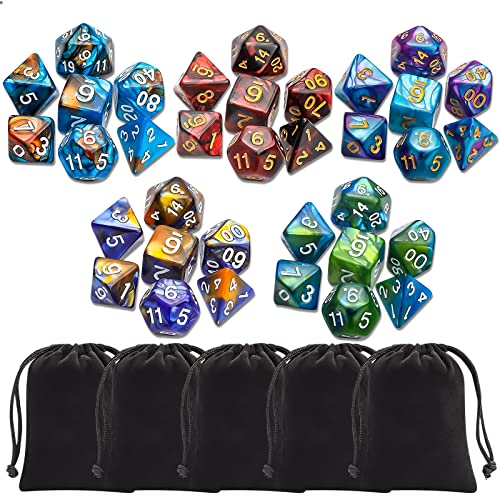 I purchased this set of dice for my son last year and they were a BIG hit. He always admired my old beat up leather pouch with my old-school dice so I wanted to make sure he had his own set that was a bit more modern and flashy.

This is a great set and really inexpensive at right around $10-12. And it’s great because they give you a total of 35-dice which is basically 5-different color designs of the 7-different dice sizes.

It’s really inexpensive and you can never have enough dice when you’re playing Magic: The Gathering!

Leather Pouch for your MTG Dice 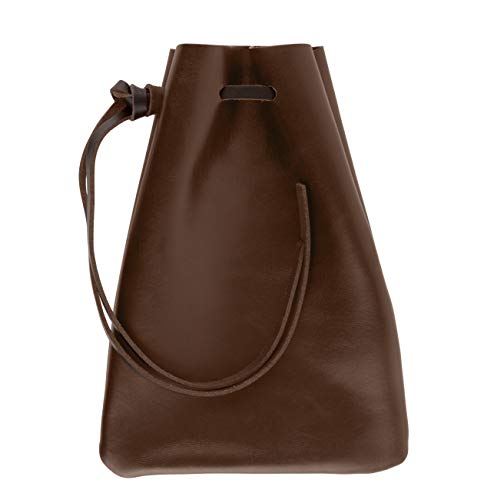 If you’re getting the dice we recommend above, you have to get this super cool leather pouch to hold them. I also purchased this for my son for Christmas last year and he loved it.

It’s just small enough to hold a few sets of dice and it’s super convenient to tie up and bring with you to a friend’s house or to store your dice away for later.

It makes a great stocking stuffer and you can pick up both the dice and the pouch for less than $25 at the time I’m writing this. That’s a great deal!