Upcoming MTG 2023 Sets: What No One Is Talking About There is a full slate of upcoming MTG 2023 sets that will start appearing on shelves early in January and there’s much to discuss for sure. But the one thing no one is talking about is whether Hasbro will drive Magic reputation further into the ground or if this slate of new sets will revive a brand back to its heyday.

Below is everything that we’ve heard about so far from Hasbro/Wizards of the Coast and it’s an interesting list of sets that could change the landscape of Magic. Which ones will be winners and which will suck royally? Will Hasbro continue to upset its fanbase in 2023? Let’s discuss….

The first set to hit the market in very early 2023 will set the tone for the year and it’s a good one. Although Amazon is currently showing a release date of December 2023 (late in the year), all sources right now are showing this is actually the FIRST release for the year and will be available in January.

The Dominaria line started back in 2018 and booster boxes for the original set are still holding strong in the $200 range. Wizards then took the Dominaria line a step further earlier this year (September 2022) with the release of Magic: The Gathering Dominaria United Draft Booster Box | 36 Packs + Box Topper Card (541 Magic Cards) and so far it’s been just OK. I wouldn’t call it a complete dud, but boxes that were initially selling for $125 out of the gate can now be had for under $100. If you want my 2-cents I think Hasbro got a little greedy on this one, shoved too many different products and a ton of inventory on the market and decided to cash in. Over time the product will get absorbed into the market, but this one was a cash-grab and that didn’t help the community’s perspective on Hasbro for sure.

Dominaria Remastered is supposed to be a “Limited Print” product and will only have a DRAFT BOOSTER BOX and a COLLECTOR BOOSTER BOX. I think this is good as I’m personally tired of trying to decide between Set boxes, Draft boxes, and Collector boxes. It’s just too much.

I expect prices to be high (over $200 for both boxes for sure) and quantities available to be limited. This is one I would probably look to pre-buy to lock in if you’re super interested.

If I had to choose one set that I was most excited about it would be Phyrexia: All Will Be One. The image of Elesh Norn (considered The Mother of Machines by her followers and leader of New Phyrexia according to the story line) is enough to make you want to buy these boxes! The art is freaking amazing!

Hasbro unfortunately went back to their massive product line for this new set. So you’ll have options to buy Set Boosters, Draft Boosters, Collector Boosters, Jumpstart Boosters as well as Bundle Boxes and Commander Decks. 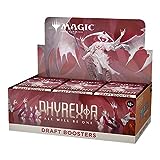 This  leads me to believe we’ll be seeing a Dominaria-United-like cash grab coming. I would be very leery about throwing a ton of cash at this one pre-release as I think prices could fall back over the initial few months. But I think this could be a long term winner so monitor prices and decide when it’s best for you to get in.

Amazon is currently pre selling boxes a bit higher than I like (Draft and Set booster boxes are pre selling for around $150-170.) But keep an eye on their site as you’ll probably see prices adjust as we get closer to the release date. No doubt, this set will be in demand and I can’t wait to see more of the cards as we approach January/February.

Very little is known about this set at this time other than it will be “the epic conclusion of the four-set story arc that began with Dominaria United—and ends with Magic forever changed” per a quote from Wizards of the Coast. Sounds exciting so we’ll have to wait and see how successful the previous set (Phyrexia: All Will Be One) is as that excitement or disappointment will spill into this set for sure.

From everything we’re hearing, this will most likely include the full complement of booster boxes and bundle boxes as previous standard expansion sets. If this ends up being the case, we’ll have to monitor it closely as a large amount of product hitting store shelves with only 1-2 months in between releases could affect prices and player/collector morale.

Couple that with what I believe will be a rocky macro-economy through a good part of 2023 here in the US (and possibly worldwide) and you have a recipe for a Magic recession of sorts. My recommendation is to hold off on pre-buying this one until we know more.

About 2-months or so after March of the Machine hits store shelves we’re being told you will see this smaller expansion “epilogue” set entitled “March of the Machine: Aftermath.” And from what we’re hearing, this will not be a full standard set like its predecessor and it will not be like any set we’ve seen in Magic.

So what could this set be? Will it be a very small 100-card or less expansion set with 8-card packs like the old Antiquities or Arabian Nights? Or will this be a larger set of cards with Draft Booster Boxes only? Only the Wizards people know at this point but I’m sure they’ve come up with something unique that will drive interest.

If I had to guess, we’ll probably see a very limited print run single-product-line issue that players and collectors will be scrambling to buy. Print runs will be low and it will be Hasbro’s way of putting the spotlight again on Magic to set things up for their next cash cow (see Wilds of Eldraine below.)

This is another MTG set that I’m super looking forward to, but will have to wait until late 2023 to actually experience it.  MTG Wilds of Eldraine is a follow up to the Throne of Eldraine, which I can’t believe will be 4-years old once this new Wilds set hits shelves. The storybook world of Eldraine awaits as we venture beyond the Realm into the Wilds, filled with fairy-tale wonder — and danger.

Could we see a Legendary Artifact that rivals the very popular THE GREAT HENGE? Will the Planeswalker Oko or Legendary Creature Rankle, Master of Pranks make a reappearance? And will Fetch Lands be the thing that draws players and collectors back into this popular fairy tale world?

As of right now, everything is pure speculation when it comes to Wilds of Eldraine. Keep checking back for more information on this much anticipated set.

Booster Boxes for the 2017 and 2018 versions still continue to hover around that $150 mark so they haven’t made huge leaps in value by any means. My guess is the Dinosaur meets Pirate concept never really caught on and those two were the least favorite block for many players back a few years ago (and probably still today.)

Although information on this new set is sparse at this early stage, it looks like we’re about to see what lurks beneath Ixalan. My only hope is that it’s WAY better than what lurked ON Ixalan as most would agree it wasn’t too exciting up there.

Wizards will be pushing the Universes Beyond (UB) sub-brand further in 2023 with the release of two larger sets centered around Lord of the Rings and Doctor Who. These sub-brands are normally not Standard legal and are meant to combine Magic gameplay with the Intellectual Property (IP) from other popular brands.

In the past we’ve seen smaller UB sub-brand Secret Lair issues for The Walking Dead, Stranger Things, Arcane, Street Fighter and Fortnite which were fairly popular. More recently, the Warhammer 40,000 Commander Decks and Transformers cards from The Brothers’ War sets expanded the UB idea as well. However, this is Wizards first venture into larger UB sets and I’m anxious to see how they combine Magic gameplay with two wildly popular IPs.

Universes Beyond: Lord of the Rings – Tales of Middle-Earth

The first to hit the market in Autumn of 2023 will be MTG Universes Beyond: Lord of the Rings – Tales of Middle-Earth. I think there’s a ton of overlap when it comes to fans of both Magic and the LOTR movies. So in that respect, I think the potential for this combination of MTG and Middle-earth Enterprises could turn out to be very popular.

Wizards shared some more information about this set that gives us a pretty good idea of this combo:

This is definitely a set that I can’t wait for and I hope to have more spoilers to share soon.

Universes Beyond: Doctor Who The other set expected sometime in 2023 is MTG Universes Beyond: Doctor Who.  I’m a little less eager for this one as I’m not a huge fan of Doctor Who. When it comes to Magic, I’m a traditionalist so I like the dragons and crazy creatures from that 1990’s era. When you start mixing British Sci-Fi characters with Magic, I’m just not a huge fan. But I understand there’s definitely a market for these things as the population of Magic collectors and players spans decades of age groups. Plus it’s a huge opportunity for Magic to bring in more fans, players and collectors and I’m all for that.

WHAT NO ONE IS TALKING ABOUT

There are two major issues that I think might affect Magic’s lineup in 2023, both from a sales perspective and a trust factor.

I still think the elephant in the room is the tarnished relationship between Wizards and its fans as I still think the Magic 30th Anniversary debacle and Hasbro’s push to sell more direct-to-consumer on Amazon is not sitting well with a lot of current players, collectors and Local Game Stores. If you don’t know about this issue, Rudy from Alpha Investments summed it up pretty well in the video below.  I think this has the potential to affect how players view the upcoming MTG 2023 sets and whether they open their wallets for most or all of the new sets coming out or if they collectively decide to be more picky about the dollars they give to Hasbro.

The other elephant in the room (which is more like a gigantic Woolly Mammoth to be honest) is the economic issues affecting the US and really the entire world. I won’t go into much detail here as I’m not an economist, but we all know we live in a time of rising prices, declining incomes and general uncertainty about the future. I know many people believe we’re headed for tough economic times in 2023 and that will definitely affect how much discretionary income people have to spend on Magic: The Gathering and it’s upcoming line of MTG 2023 sets.

I don’t think many people are talking right now about how this will affect things in the world of MTG in 2023, but it’s something to monitor for sure. Let’s hope the entire world gets out of this mess soon and that we get back on stable ground soon.

Keep checking back for updates here on MCI as we’ll continue to update you as we receive more information about upcoming MTG 2023 sets.. As always, if you have any questions or would like some more advice about cheap Magic booster boxes, I’m here to help. Just hit me up on the contact page or over at Twitter or Instagram. Best of luck and if you haven’t already, start investing in Magic (and other TCG’s) today!